As Rush puts it:

Here’s Donald Trump being set up by Blitzer and CNN, for the express purpose of what? Using that interview last night to do nothing but besmirch Romney with Trump and this birther business. That becomes the media narrative all day, so you can talk about Romney and his associations.

President Barack Obama on Tuesday awarded the Presidential Medal of Freedom to an honorary chair of the Democratic Socialists of America, Dolores Huerta.

The Heritage Foundation notes that Huerta, 82, has in the past said that “Republicans hate Latinos” and praised Venezuelan leader Hugo Chavez.

When President Obama gave the commencement address last week at the Air Force Academy, he congratulated the cadets for excelling at one of the most demanding schools in the country.

But decades after Mr. Obama completed his own college course work, his academic performance is still a mystery.

Before and after his election as president, Mr. Obama has refused to release his college transcripts from his days as an undergraduate and a law school student.

A spokesman for a leading veterans organization criticized MSNBC’s Chris Hayes for arguing on his television show that that he’s “uncomfortable” describing American soldiers who died in battles as heroes.

“If Mr. Hayes feels uncomfortable, I suggest he enlist, go to war, then come home to what he expects is a grateful nation but encounters the opposite. It’s far too easy to cast stones from inexperience,” Veterans of Foreign Wars spokesman Joe Davis told The Daily Caller on Sunday.

In an AP story posted at The Blaze:

Scores of Maine churches will pass the collection plate a second time at Sunday services on Father‘s Day to kick off a fundraising campaign for the lead opposition group to November’s ballot question asking voters to legalize same-sex marriages.

Between 150 and 200 churches are expected to raise money for the Protect Marriage Maine political action committee, said Carroll Conley Jr., executive director of the Christian Civic League of Maine evangelical organization and a member of the PAC. Conley is also trying to drum up support for the Maine campaign from religious leaders from around the country.

Kudos to people of goodwill in Maine stepping up to protect kids, families, and marriage from the extremism and aggression of pro-homosexualist activists and their secular enablers in the media and elsewhere.

Stand up to monodimensional secularist bullies who despise the wonder and liberation of male-female diversity in marriage.

And overcome those reactionaries who would impose their private, subjective values upon a body politic rooted in verifiable truth rather than relativistic marketing campaigns awash in half-truths, distortion, and invective.

Here is the Facebook page for Protect Marriage Maine.

We have added Houston Baptist University to The Pearcey Report list of resources.

Nancy has recently accepted an HBU appointment as a Scholar in Residence.

As we noted previously, she will join the faculty as a full professor, and "her duties will include teaching, research and writing, and helping to create a new MA program in Apologetics."

A 1996 print advertisement in a local Chicago newspaper shows President Obama was the speaker at an event sponsored and presented by the Democratic Socialists of America, the DSA.

Here is the advertisement: 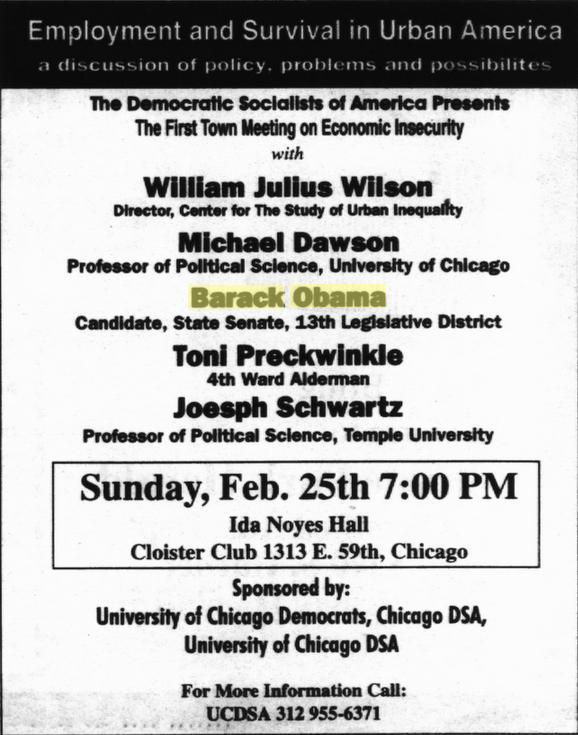 The city council of Burlington, Vermont, has passed a new ordinance that could have the effect of banning pro-life protesters from exercising their right to protest in front of the town’s Planned Parenthood facility.

In a major development in his probe of Barack Obama’s eligibility for Arizona’s 2012 presidential ballot, Maricopa County Sheriff Joe Arpaio has dispatched his lead Cold Case Posse investigator and a deputy detective to Hawaii.

The mission to Obama’s purported birthplace comes as the Hawaii Department of Health continues to resist efforts by Arizona Secretary of State Ken Bennett to verify that the Honolulu agency has a valid birth certificate on file for Obama.

Internal documents filed against the world's largest Christian broadcasting network were quickly sealed by the ministry in the midst of allegations of wrongdoing.

Romney Holds Fundraiser With Maker of Morning After Pill

Republican presidential candidate Mitt Romney scheduled a $50,000-a-plate fundraiser at the home of Phil Frost, the executive of the company that makes the Morning After Pill, on Wednesday night. Plan B One-Step is produced by Teva Pharmaceuticals, Frost’s company.

Heresy in the Black Studies Tabernacle

There's the academy, and then there's the real world.

The Chronicle of Higher Education, which is the academy's weekly newspaper of record, has long seemed interested in keeping, if not one foot in the real world, then at least a toe or two in the real world, publishing articles that are written in lively, non-academic prose and even, from time to time, in the name of intellectual diversity, running pieces that take a less than entirely reverential view of higher education's left-wing orthodoxies.

It's a delicate balance -- how much heresy can you allow into the tabernacle without outraging the faithful?

Answer? "Any hint of dissent is verboten."

An insurgent Republican lawmaker in Nebraska will square off against former Sen. Bob Kerrey this fall in the state’s U.S. Senate race, as Democrats look to hold onto the Senate seat and control of one part of Capitol Hill.

In Tuesday’s Republican primary, state Sen. Deb Fischer rode a wave of discontent with the GOP establishment to best Nebraska Attorney General Jon Bruning, the preferred candidate of Washington, D.C.-based Republicans, and Treasurer Don Stenberg in a race that drew national attention from outside groups in its final, unpredictable weeks.

Among those who endorsed Fischer: Sarah Palin and Herman Cain.

From Jonathon M. Seidl at The Blaze:

Despite endorsing Obama in 2008, JFK’s daughter Caroline now considers Obama a “liar,” according to a family source in Edward Klein’s new book on Obama called The Amateur.

Nancy and I tendered our resignations to Rivendell Sanctuary yesterday. What follows is from the letter of resignation, submitted to CEO Bobby Norment:

We are writing to let you know that our family is moving to Houston, Texas, so that Nancy can assume a new appointment as Scholar in Residence at Houston Baptist University. As a full professor, her duties will include teaching, research & writing, and helping to create a new MA program in Apologetics. Rick is pursuing exciting opportunities that would be premature to announce at this time.

John Mark Reynolds of the Torrey Honors Institute at Biola University was recently announced as the soon-to-be new Provost of HBU.

Here's more news: Today, Nancy and I depart for a series of lectures at the Universidade Presbiteriana Mackenzie in Sao Paulo, Brazil.

Also, there is the recent publication of Darrow Miller's important new book, Emancipating the World: A Christian Response to Radical Islam and Fundamentalist Atheism.

I was honored to write the Foreword, which you can read here.


Franklin Graham: Obama Has "Shaken His Fist" at God

“President Obama has, in my view, shaken his fist at the same God who created and defined marriage. It grieves me that our president would now affirm same-sex marriage, though I believe it grieves God even more,” Graham said in a statement. . . .

Why the Health Nazis Are on the March

Selwyn Duke at American Thinker examines the "Cult of the Body and all its newly minted 'sins'."

A new study suggesting dinosaurs may have become extinct thanks to their own flatulence and burping is being scorched on the airwaves . . . .

"Most Klansmen and most racists have been Democrats"

Grand wizard is the title given to the leader of the Ku Klux Klan. It is truly misinformed to call Republicans the party of the Klan.

Throughout our history, most Klansmen and most racists have been Democrats. Here are a few racist quotes from major Democratic figures. . . .

Eric Ritz writes at The Blaze:

The leader of an extreme-right, anti-immigrant party on course for shock success in Greece’s general elections Sunday lashed out at those he described as “traitors” responsible for the country’s financial crisis and said his party was ushering in a “revolution.”

U.S. Military Deaths in Afghanistan More Than Doubled Under Obama

In yet another sin of omission, the national press corps has failed to report that more than twice as many U.S. military service people were killed in Afghanistan since Obama took office than in six and a half years of the Bush administration.

An international Christian ministry that assists persecuted members of the faith says hundreds of Christians have been killed in a series of attacks in Nigeria.

This is the African nation where members of the Muslim jihadist group Boko Haram earlier vowed to “eradicate Christianity.”

Patrick B. Crane reports at LifeSiteNews:

A pro-life law firm is promising a “legal war” if the Internal Revenue Service heeds a complaint filed two weeks ago against Bishop Daniel Jenky of Peoria. The complaint came after the bishop said that President Obama’s attack on religious freedom through the contraceptive mandate indicates he “seems intent on following a similar path” as past totalitarian dictators such as Hitler and Stalin.

LifeSiteNews also reports that "Brejcha, whose law firm has successfully faced down the IRS twice recently on behalf of pro-life groups, is promising free legal counsel to any religious leader who is threatened for speaking out by the government or interest groups."